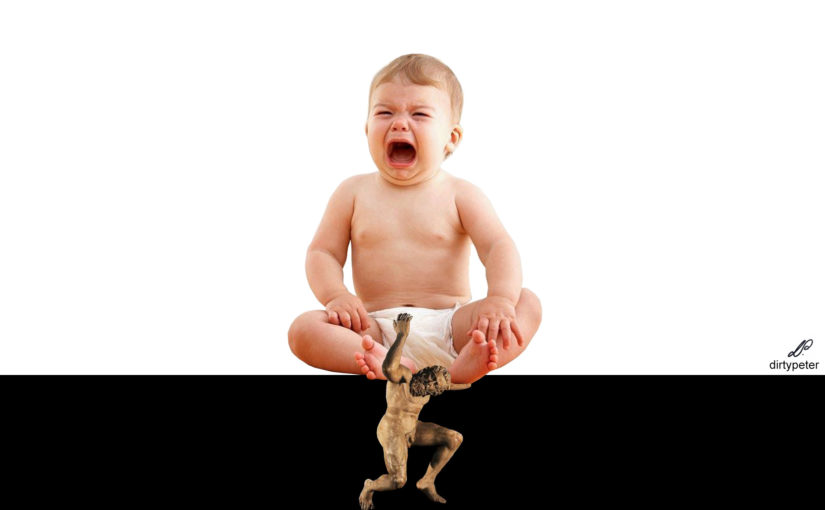 To raise offspring is a wonderful thing to do, that is always been shown in the advertisements by diaper producers, there happy family’s play together and baby’s just dressed in their diaper crawling, walking happily around. Yes, it is for a parent a happy moment if the Baby is wearing the Diaper finally after it took some time to manage putting it on against the will of the own offspring. The advertisement also always shows these super clean and well-dressed parents and baby’s, which has nothing to do with real live, since it would be inconvenient to run and crawl after a baby in these clothes, secondly after feeding, cleaning and playing, the baby and the parents are not capable to look like that, except someone else is taking care of all that instead of the parents. Parents in that stage with a small baby which started crawling standing up pulling things from shelves and protesting or start talking, wish sometimes the time back of the new-born, there the baby could just been put somewhere and it stayed there, because it could not move and you could adjust your timetable to what is coming.

We are quite unique, since in our human society, we cannot wait, till our offspring can walk and talk and right after they do so, we want them to sit down and shut up.

If parenting is so difficult and with so much work involved, why are we still having them? We are in most cases happily pregnant or fifty percentages of us at least, even with all difficulties our body sends out a lot of dopamine, or other ways we would not be happy at all with all the pain and restrictions all of a sudden in our lives. We love and take care of our offspring because they are a copy of us, and this mind-set decides of the faith of the offspring. If this is turned on, we will raise, protect our children and even would put ourselves behind, if it’s necessary.

This is important for our species, since our Offspring is not capable for long time to take care of themselves and survive by themselves, that is why two people are needed for raising one human child, because one of them always have to take care of all the other things while one is hundred percent busy with the offspring. But mother nature has invented to the sometimes appearing good night sleep an extra nap time in the middle of the day, that is very thoughtful so that the parents can also recharge in the meantime or prepare for the next halftime of the day and if they are very lucky, they can rest as well or do something for their own, like having a shower going to the Restroom, eat or what ether they cannot or could not do since the offspring has arisen.

Problem in this is, that most parents miscalculate the time they have available to do things, and it feels shorter than it actually is and the offspring also used the time to recharge the battery and is fully loaded, ready to discover the world and keep his or her environment busy and active.

There are no lazy parents with an small infant in this world, because even if they try, they have no chance to be lazy, parents know that the smallest dictatorships are in family’s with offspring. Kids would later in their becoming teenager time start to rebel and protest against this totalitarian system at home and try to make the Government surrender which in many cases happen. The interesting part here is that these rebels come just a few years later back to ask their government to support them in their plans. Since families are the most generous dictatorships in the world, they grant in most cases the demanded support. You can say that families are the oldest social System in our world and without them many of us would not survive or have achieved what we are today, our offspring and we ourselves should be reminded of that.

Since I pointed out in a bit negative way how it is to raise children as humans, maybe we ought to really ask ourselves again, why do we do that and some parents would answer especially mothers, that they just smile at you or handcraft, draw something for you and all is fine and there is nothing greater in this world. Yes, thanks to Mother Nature and vasopressin, oxytocin as well as dopamine this is possible.

Animals raise children and reproduce only cause their instinct of Mother Nature tells them and raise the children till they can live on their own, but not all animals do that as we know, since some live in herds or packs till the end of their lives together as we do too. So our family and relative society is similar to the one in the animal world, just that we create more issues than animals ever can think of, thanks to or so more “advanced” brain. This evolutional development of the social caring of a family gave us Humans, paired with a more developed brain and capability’s, to stand out of the other animals and climb on the head of the letter, even with a more fragile body than a Tiger or bear, because we stick together and formed bounds with the other families, the pack hunting and working together made us come forward a lot, that would be maybe a good example and reminder in our modern world in there we still fight against each other and everyone tries to do it all by himself instead of working together with others which would lead to faster success for all of us. Instead of acting like they want to work together.

Here an advice for future parents to buy technical equipment; if you don’t want that your freezer melts down, or your house burns down; buy all items with buttons easy to press on top of the machine! Remember if they start walking, you start running.